Our Latest Equipment is Best to keep your Vision perfect like Eagle!

Diabetic Retinopathy is the leading cause of blindness in Americans under the age of 65. The severity of its visual impairment is related both to the duration and the degree of diabetic hyperglycemia. In this regard, diabetic retinopathy parallels the effect of diabetic hyperglycemia on other organ systems, such as the kidneys, heart and peripheral vasculature. The eye is the only place in the body where blood vessels and nervous tissue can be directly visualized. Therefore, the ophthalmologist and retina specialist are in a unique position to monitor the effect of diabetes mellitus not only on the eye but also on the entire body, and thus provide essential information to other physicians involved in the care of the diabetic patient.

Fluorescein angiography consists of intravenous injection of fluorescein dye via the antecubital vein followed immediately by serial photographs with a retina fundus camera. This procedure detects retinal vascular abnormalities and neovascularization not apparent by even the most careful inspection, and is a routine office procedure that is indispensable in the diagnosis and staging of diabetic retinopathy.

Although only a minority of diabetics progress to the proliferative phase, the visual effects they experience can be devastating. If a vitreous hemorrhage is mild or diffuse, it generally clears over a period of weeks or months. However, if the vitreous hemorrhage is recurrent or severe, spontaneously resolution becomes less certain. The intravitreal heme may clot and stimulate the growth of neovascular membranes resulting in a tractional retinal detachment. These same membranes may create a tractional force sufficient to tear a hole in the retina, allowing vitreal fluid to insinuate itself between the retina and the underlying choroidal layer. This results in what is termed a rhegmatogenous retinal detachment. The latter even significantly decreases the odds of successfully repairing the retinal detachment.

The neovascular process can affect the anterior portion of the eye as well as the posterior portion via neovascularization of the iris and iridocorneal angle. An intractable and often untreatable neovascular glaucoma is often the endpoint of this process. The patient is left with an eye that is not only blind, but one that is extremely painful as well.

The previously described entities have been well recognized for many years. Another form of diabetic visual impairment which has been more recently elucidated is diabetic macular edema. This thickening of the central retina, due to plasma exudation from microaneurisms and permeable capillaries in the macular area, affects both reading and color vision. Macular edema used to be considered an untreatable form of diabetic retinopathy. However, recent clinical trials have demonstrated the efficacy of focal laser treatment in preventing, stabilizing and reversing the visual loss from this process. Significantly, laser treatment has proven beneficial when there is evidence of retinal thickening from diabetic macular edema within 500 microns of the macula, even though visual acuity is not yet affected. Thus, early detection and treatment will prevent predictable visual deterioration.

It has been known for over a decade that retinal laser photocoagulation of the proliferative phase of diabetic retinopathy significantly reduces the risk of vitreous hemorrhage and its subsequent complications, including visual loss. Treatment consists of approximately 1500 argon laser applications of a 500 micron size to the peripheral retina while avoiding the central macular area, and is termed panretinal laser photocoagulation (PRP). When macular laser photocoagulation is necessary to treat macular edema and preserve central visual function, smaller laser foci of 50 to 100 microns are applied either directly to leaking microaneurisms or in a grid pattern to the area surrounding the macula. The argon green wavelength is generally the preferred laser wavelength because it is best absorbed by the hemorrhagic retinal tissue. However, when the media is hazy due to a cataractous lens or a vitreous hemorrhage, the krypton red wavelength is often the only way in which the haze can be penetrated and the treatment applied.

A vitreous hemorrhage that fails to clear or that recurs may necessitate surgical intervention. Pars plana vitrectomy is a technique whereby the vitreous hemorrhage may be aspirated or tractional membranes severed by direct mechanical instrumentation of the midvitreal portion of the eye. This sophisticated procedure, which has become technically feasible only in the past several years, involves making three incisions in the eye; one for the placement of an infusion cannula of balanced saline solution, a second for a fiberoptic light source, and a third for the insertion of micro instruments, such as a suction-cutting probe, a membrane peeling forceps or a fiberoptic endolaser. The endolaser permits photocoagulation of the retina while the patient is on the operating table. This technique combined with an intraocular expandable gas injection significantly decreases postoperative hemorrhage and maintains an internal retinal tamponade which aids in retinal reattachment.

Although retinal laser treatment may be comfortably and safely accomplished in the office, vitrectomy surgery is best performed in the hospital inpatient setting due to the requirements of extensive instrumentation, particularized postoperative care, and the frail health of the individuals who often require this procedure. For these reasons, a surgical vitrectomy unit has been established in Palm Beach County.

We Have Best Professional Team To Care Your Eyes 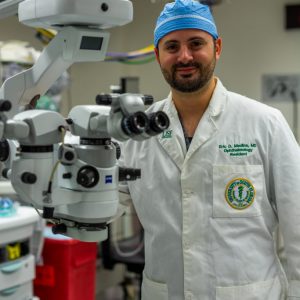 LAUREN R. ROSECAN MD PHD FACS THE RETINA INSTITUTE OF FLORIDA Growing up the son of a prominent internist and endocrinologist, Dr. Lauren R. Rosecan’s natural predilection toward medicine ensured that his

If you Have Any Questions We are Here!! DON'T HESITATE TO CONTACT US ANY TIME.